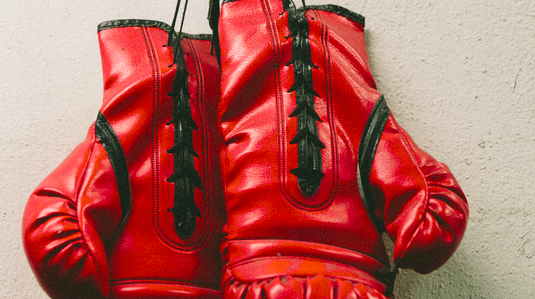 I was fortunate enough to head to Vegas for the Connor Vs. Mayweather fight. It will go down as the best trip of my life. I bought tickets to the fight but the goal of the trip was to meet both the fighters.

It was an ambitious goal. But not only did I watch the fight and meet the fighters – I did it in ringside seats, mingled with A-list celebrities and went to both fighter’s after-parties all in one night.

I managed to do this by using the same key techniques I use to overcome objections in sales situations...

On the night of the fight, we decided to get to the stadium early and check out the ring. We got as close as we could and started chatting to people around us.

The stadium started filling up but no one had asked us to leave. So we didn’t. Before we knew it the fight was about to start and we’d been ushered into ring-side seats!

To top it off we were only a few seats away from Tony Robbins. He’s been a huge inspiration for me throughout my career, so I wanted to meet him. However, I knew that bowling up to him before the fight when the atmosphere was tense, wasn’t going to result in a good outcome. So I waited until the fight was over and things were a bit chaotic. Sure enough, the big man was happy to meet me.

Every sales situation is unique and timing is everything.

This chain of events only occurred because I made decisions based on a careful assessment of the environment.

The ability to read people’s body language and reactions is key to any successful outcome in sales. If your prospect's attention is on something else or their body language is closed – crossed arms and avoiding eye contact – you may want to reconsider the message or timing of your pitch.

You also need to listen out for verbal cues that suggest they’re not ready to buy.

After the fight I followed the crowd, only to find myself through security and in Connor’s private after-party.

The only way I managed to get there and get treated like a VIP (when I wasn’t) – was because I was confident. So confident that security never doubted my presence.

Confidence is vital in any sales situation. Imposter Syndrome is very real for most people. But if you doubt yourself, it’ll show in the way you carry and express yourself.

Know that you deserve to be where you are and hold your head high. Your prospects will buy into that confidence and it’ll help you close deals.

Never be afraid of rejection – what’s the worst that can happen? Try and see objections as an opportunity to sell yourself and gain trust.

The best thing that can happen is that you get the deal.

To top off my crazy night in Vegas – I got into Mayweather’s strict VIP only after-party – without an invite.

The first thing I did was go over to a guy who was standing by Mayweather’s car (a red Bugatti). And I asked what the bouncer's name was. It was Rob. So I went up to him and said, “Hey Rob – great to see you, I’m a good friend of Floyd’s from New Zealand and he told me to come along tonight.” That worked like a charm and I was in.

As a species, we’re innately ego-centric. We need to be – to survive. If you want to connect with people you need to get their attention first. The best way to do that is to appeal to their ego. Do your research. Find out their name and a bit about them. Then use that knowledge to attract and keep their attention and then ultimately give them your pitch.

Win like you’re in Vegas – be confident, always assess the situation and make a prospect feel like a person.